“From the moment the bow first kissed its strings, Rev. Patrick McCollum’s miracle violin resonated to an entirely different sphere of life. Without a doubt, it is not of this world, but here to help guide us home where we each long to be. It is said that a truly fine violin is destined to find its rightful owner, yet this one can never be owned, it can only be shared with all. For, how can any of us own eternity?” ~ Michael J Tamura, Author

How You Can Join in the Stewardship of the Violin
It is the intention of The McCollum Foundation to make a difference on planet earth. With this stewardship, comes great responsibility. With financial support and assistance, the vibration and the metaphor of the World Peace Violin will continue to be heard around the world.
We invite you to become part of our growing team of stewards of the World Peace Violin. Contributions can be accepted in one sum or divided into monthly, quarterly, or semi-annual amounts depending on your needs and desires.
Donations to the World Peace Violin Project are tax deductible and will be gratefully accepted through The McCollum Foundation. Major sponsorship is $30,000 to $1,000,000+ and will be recognized in all brochures, websites and promotional materials associated with the violin. These materials will go out to the masses and are specifically targeted to top government and religious leaders worldwide.
Another opportunity to financially support the World Peace Violin Project is to invite the violin to be played at private or public events both nationally and internationally. The fee would be based upon the nature of the individual event and where it is to be held. The McCollum Foundation also welcomes those individuals, corporations and organizations that are willing and able to create fundraisers that highlight the World Peace Violin. Consider the possibilities!
By becoming honored donors, major sponsors and by creating experiences such as these, we each become intimate players in creating the sacred world we envision. With your support, the sound for peace will be amplified and the joyous music emanating from this symbol will continue to play and create peace between and among all cultures and all people.
For sponsorship information, creating a social event or fundraiser, and to arrange for The McCollum Foundation to receive your gift, with deep gratitude, please contact:
Nell Rose Foreman
Managing Director
The McCollum Foundation
NellRose@patrickmccollum.org

This site uses Akismet to reduce spam. Learn how your comment data is processed.

Blessing the violin in Rishikesh India for women's rights 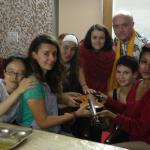 Voice of Peace by Yuval Ron performed by Scarlet Rivera from yuvalron on Vimeo.